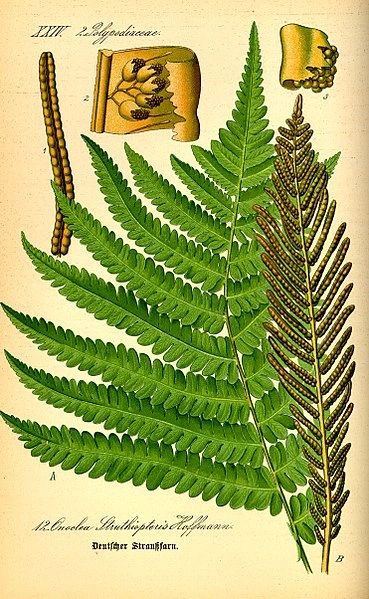 Cultivation:
"The preference is light shade or dappled sunlight, wet to moist conditions, and a somewhat acidic soil that is peaty and/or sandy. Average moisture conditions are tolerated if this fern is watered during dry spells. The leaves are delicate and easily damaged. In more heavily shaded areas, Ostrich Fern often fails to produce fertile leaves." (Hilty)
Faunal Associations:
"Caterpillars of the Ostrich Fern Borer Moth (Papaipema sp.) bore through the stalks and/or root system of this fern. This rare moth has been found in the New England area of the United States, where the Ostrich fern is more common, although it has not been found in Illinois. At the present time, this moth has not been scientifically described. Another insect, the aphid Amphorophora ampullata, feeds on Ostrich Fern and other ferns (Blackman & Eastop, 2013). Because Ostrich Fern has large leaves and often forms colonies, it can provide substantial protective cover to various kinds of wildlife where it is locally common." (Hilty)
Covers
North Carolina Extension plant description: Onoclea Struthiopteris (Ostrich Fern) | North Carolina Extension Gardener Plant Toolbox. https://plants.ces.ncsu.edu/plants/onoclea-struthiopteris/. Accessed 2 Feb. 2022.